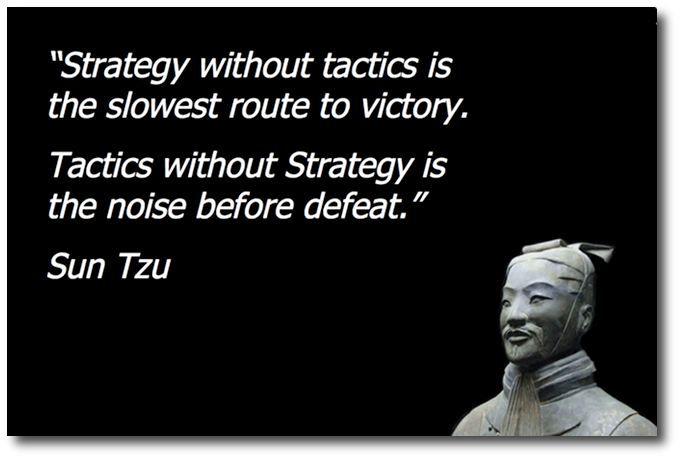 As Sun Tzu alludes to above, a primary reason why companies today fail to achieve their revenue or profit goals is because there's a fatal disconnect between their strategy and their tactics.

There are lots of ways, in marketing and sales, in which the tactical shortfalls can manifest. For example, companies can fail to break through the clutter in the media, or they can run out of money or time. They may not generate enough sales leads, or the leads may be of poor quality. They can fail to qualify as a vendor, or competition wins either on features, relationship, or price. Salespeople can fail to close successfully, or they have to cut price to win.

Likewise, there are at least a few ways in which strategic shortfalls can manifest, a frequent one of which is the lack of a written strategy, and no one actually understands how the company is going to meet its goals. Another is confusing strategies and plans. But the most common is a complete disconnect between goals and the strategies that will actually achieve them.

And poor integation of strategy and tactics also has its symptoms. For example, failing to confirm that the output of one tactic is sufficiently useful to the next is common, as is failing to checkpoint that the tactics are sufficient to achieve the goals.

But while these steps are often necessary to fix problems, they are often not sufficient. This is because rarely is the solution to just spend more money, change vendors, or even just to write a strategy. Often it's necessary to go back to the drawing board, even if it's just to re-check your assumptions.

And that's where the real problem can often be found. The drawing board, for most companies, usually doesn't have a fully fleshed-out set of strategies and tactics that you can go back to.

And the failures were the symptoms of bad planning, not the disease itself.

The Right Way to Plan

The classic model for strategic planning, and for reconciling the disconnect between strategies and tactics, was developed at IBM in the 1960s, and is known as the GOSPA model. As shown below, GOSPA is a hierarchical planning methodology, the elements of which are Goals, Objectives, Strategies, Plans, and Actions, and the associated performance Monitoring, as well. 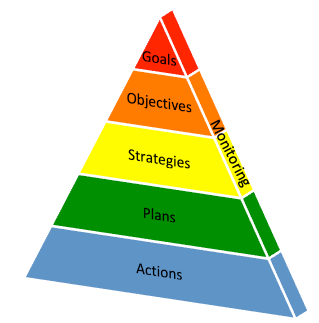 GOSPA is both a top-down and bottom-up planning methodology. That is, it doesn't matter where you start (i.e. at the top or the bottom); what matters is that everything fits together, and works. This means, for example, that you have Objectives that, if they are all met, guarantee that the Goal will be met. If all your Strategies are implemented correctly and effectively, your Objectives will be met. If you implement your Plans, your Strategies will succeed. And if you do all the Actions, then your Plans will succeed. Confirming these assertions during the planning process assures that nothing will be missed, and you won't find out too late that you forgot to account for something.

It's not our goal here to teach GOSPA. (We do, however, use it to develop our clients' strategic marketing plans.) Rather, our goal here is to point out that there is an answer to Sun Tzu's challenge, and to reconcile the disconnect between strategies and tactics.

And that answer is GOSPA.