You're Kidding Me, Right??

But does this crap really work?

You actually have to follow the whole thread to see the humor. Mind you - this thread is from someone who supposedly knows what they're doing, as they work for a lead generation company. But this has to be one of the dumbest things I've ever seen.

Here we go: First, he sent an introductory email. It told me what he does, and he even included a metric for credibility. He asked me if I have some time to talk, and provided me with his calendly link. So far, so good. Assumedly, if I was interested (and some people must be responding, because I see these several times a day), I would click the link to set something up.

Since I didn't respond, his system fired off another email five days later. As one would expect, this one had a slighly different benefit, told me his purpose, and asked me to send him a referral if I don't have a need myself. He seemed to be trying to make it look casual by suggesting we might "hop" on a call, but I don't "hop" on calls, as I take my communications a bit more seriously. So again, I ignored his email.

So six days later, I got another email. This one was shorter - apparently out of respect for my inbox. But it included an implicit promise that this was going to be the last time he emailed me.

Oh, but I wasn't that lucky. I got the same email two weeks later. Apparently, respecting my inbox doesn't include leaving it alone.

When I got the same email again two weeks after (why does he keep forwarding the thread!?!) I saw what's really going on when he asked: "Perhaps there's a better way of getting in touch with you?"

Knowing that his technique wasn't working, and knowing that we at Leadgen.com are experts at marketing, could it be that he just wants to be a client?

P.S. Hey, Derik. If you're listening, if you're looking for a better way to get in touch with someone, why don't you try using the phone? 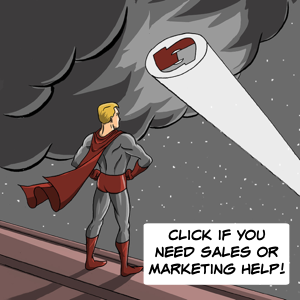