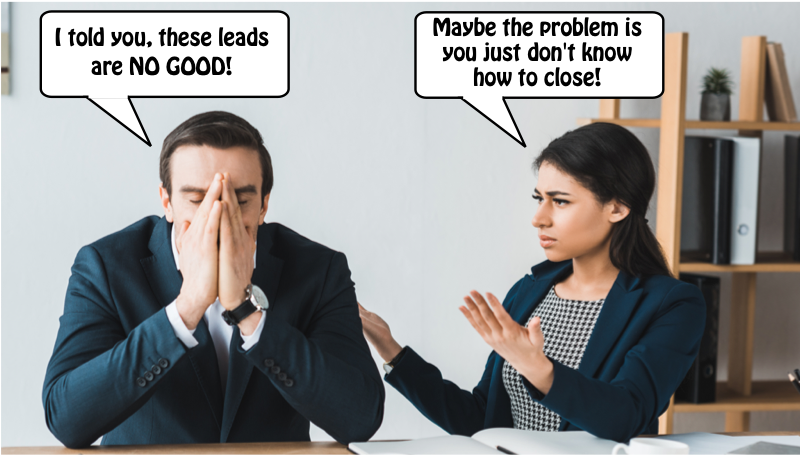 Does This Sound Familiar?

The Missing Link problem refers to the different definitions used by Marketing and Sales professionals when they talk about what constitutes a "sales lead" - or, more precisely, what each considers to be a qualified sales lead. And it can occur whether you're in B2B or B2C.

There are all sorts of so-called solutions available, such as lead scoring systems, and marketing tactics that are designed to produce "Marketing Qualified Leads" (MQLs) versus "Sales Qualified Leads" (SQLs). But these are mostly just band-aids. [more/less]

The problem is that Marketing generally doesn't interact directly with the customer. In B2B, for example, Marketing typically doesn't do appointment-setting, which is the one thing that most B2B salespeople actually want - provided that the appointment is with a decision maker who has a need for the product or service, and who wants to talk to a salesperson about how it can help. In B2C, Marketing is usually more concerned with promotion than understanding needs, which is ultimately what really drives the sale.

But Only One Definition Matters

Whether you're in B2B or B2C, the key to business growth - and the connection between your marketing and sales programs - is the "qualified sales lead." No matter what you sell, or to whom you sell it, producing qualified sales leads is the "critical path item" to success. This is because, while "nothing ever happens until somebody sells something", "no one ever sold anything until they got in the door."

In other words, whether you sell to industrial, commercial, healthcare, professional, IT, financial companies or consumers, the only thing that matters, as far as your Marketing program is concerned, should be the production of qualified sales leads. As a Sales rep, exposures, clicks, visits, lists, eyeballs, opens, attendees, content reads and contacts are nice to have. But what you need are qualified sales leads, because those are what drive sales.

So how do we define a qualified sales lead?

In short, setting the initial appointment must either be the last step in the Marketing process, or the first step in the Sales process. But somebody has to do it. Otherwise, you have a Missing Link problem, and nothing is going to happen.

Who Can and Should Set the Initial Appointment?

The question of whose job it is to set the initial appointment is often asked, but rarely examined. For example, many companies simply assume that it's part of the Sales function, and leave it at that. The problem with this approach is that when their salespeople get too busy closing business to look for more, the prospecting job goes undone.

This partly reflects the belief that Marketing's job is to create awareness and stimulate interest. And that it's the salesperson's job to take that interest and convert it into an initial appointment. But at many companies, this is naive in the extreme.

This is primarily because most decision makers don't respond to Marketing. They're too busy doing their jobs or living their lives. Especially with the demise of print, Marketing's effectiveness at creating awareness among actual decision makers is at an all-time low.

And even assuming that Marketing can create awareness, you're then faced with the problem of getting the prospect to take action - i.e. to respond and book an appointment. Where you used to be able to include a Business Reply Card in a Direct Mail piece for a prospect to request an appointment, effective analogues in B2B today are almost non-existent.

But it's also because creating awareness and stimulating interest are hugely overrated steps in the sell cycle. It's not that they're not important, but the amount of money companies spend on them is generally far out of proportion to their impact on the process.

To get a sense of this disproportionality, consider that it might take a $100,000/year salesperson 15 minutes to make a cold call and get an appointment with a new, qualified prospect. That's $12.50. If you ask Marketing to do it, it could easily cost 1,000 times as much.

That doesn't mean that the salesperson should make cold calls. A lot of salespeople don't like doing it. And many others don't know how. It just means that it's generally idiotic to expect Marketing to set appointments for anything approaching a reasonable cost.

Lead Generation Can Solve the Problem

This, however, leaves a huge gap in the sell cycle. Specifically, if Marketing can't generate appointments, and Sales won't do it, who's going to do it? Who's going to actually get you in the door with the decision maker so you can discuss their needs and pitch your solution?

That, of course, is where we come in.

Have a Sales or Marketing problem? Click here for a solution!